In the natural environment only 10 eggs actually make it to maturity.

After the eggs hatch they are in the planktonic stage, lasting 3-10 weeks.

They are free swimming and stay near the ocean surface.

They are about the size of a mosquito.

The lobster larvae molts a total of five times before reaching the benthic stage.

The lobster are now located on the ocean floor, and reside in sheltered areas.

Here they feed on small prey until they are strong enough to leave the shelter and forage for food. 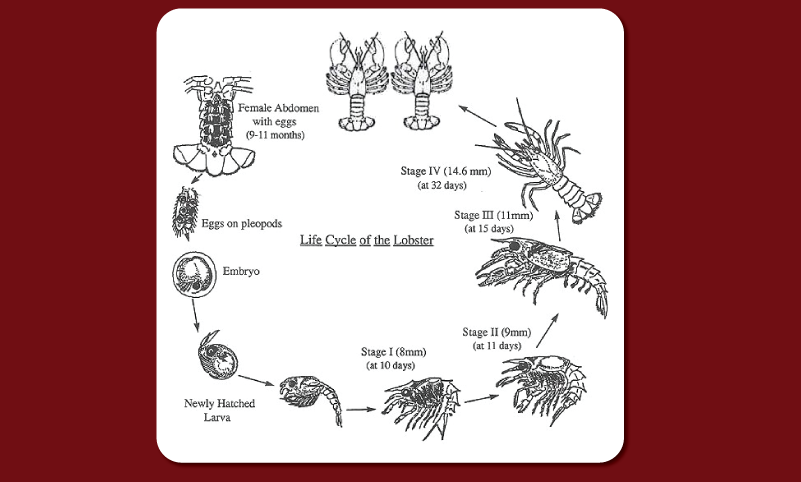 In order to sustain healthy lobster populations lobster farming or aquaculture, and hatcheries have become necessary. In the 1900’s the first hatcheries were established internationally. These hatcheries intended to hatch, raise and release post-larval lobster back into the natural environment. Lobster farming or aquaculture is the complete rearing from egg to food grade size, which can take up to seven years. They are then sold to the seafood industry.

It is hard to create environments that mimic the sea surface where larval lobster get their start.

The tanks are large cylindrical columns holding around 80 liters of water at 17⁰C-20⁰C. They hold 12-25 larva per liter. The water column is circulated by a water pump located at the base of the tank. The images below show how lobster larval tanks work.